Stephanie
I. LOVE. FOOD. Ever since I was little and was in the kitchen cooking with my mom I have loved food and everything about it. So finally I thought, why not share my own experiences, thoughts and recipes? Its time.....I hope you enjoy it!

Also check me out here: 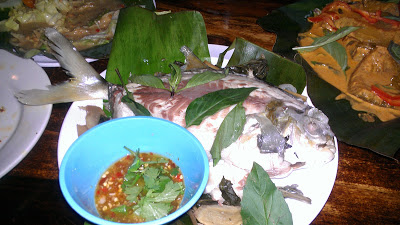 Thai X’ing - the not-so-secret secret Thai place you definitely want to check out.  The restaurant is located in a row house on Florida Avenue tucked away behind grape-vine covered trellises.  Unless you’re looking for it, you could easily pass it by.  Until recently, the only way to get a reservation was to call and call and call and hope they would return your increasingly more desperate messages.  Then, as of a few days ago, when I was trying to retrieve my wallet that I inadvertently dropped on the floor the night I ate there, an email address popped up on their site (and they responded within an hour!).  However, their website seems to change on an almost daily basis, so don't be surprised if only a phone number is available.  Not sure what’s up with that, but here is the site (www.thaix-ing.com) - do your best to get a reservation and try it, it is totally worth the time and trouble.

Here’s the deal:  This isn’t a fancy place.  You’re basically sitting in someone’s house as a few servers scurry around bringing you plates of food and walkie-talkie messages to the kitchen.  As far as I know, they only serve water, so bring your own alcohol if you prefer.  Some nights are vegetarian and some nights have meat.  There is never a menu.  When I went, we had a group of 4 people and received 9 dishes, including a whole fish and it was more than we could eat.  Here’s a rundown of what we were served:

-     1) Tom Yum Soup with mushrooms and some other random veggies.  The broth was slightly creamy and quite spicy, with coconut milk and lemongrass. Awesome. 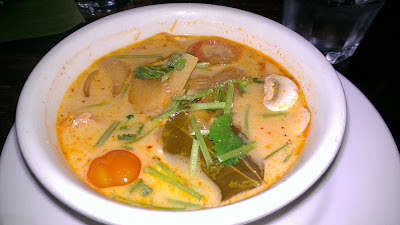 -      2) Seaweed salad –ummm, no clue what was in this other than some weird squishy seaweed and some ginger mixed in.  Weird, but still tasty.

3) Fish cakes.  This was the one major downfall of the meal in my opinion.  At first I was excited - who doesn't love a good little fried snack?  But then after one bite my excitement fizzled.  Imagine the texture of overcooked fake chicken nuggets...now add salt and fish flavoring.  Eww, not my cup of tea.

4) Green papaya salad.  So good - light, refreshing, and the perfect flavor to get that fish taste out of my mouth!  The papaya was julienned with some other veggies - green onion, tomatoes, etc.  The dressing was tangy, spicy and slightly sweet.  There was definitely some lime juice at play here.  Yum.

-         5)  Green beans with tofu.  I would call this a green bean salad as I thought that's what we were told, but after a good old-fashioned critiquing of this post by one of my dining companions, I am changing the name to   "green beans with tofu" as he insists it was not a salad, but was meant to go over the rice.  I don't even remember the tofu in it (but I did have a rather large glass of wine pre-dinner).  Call it what you will, there was some sort of spicy sauce on the beans, definitely involving some chilis...it was quite good. 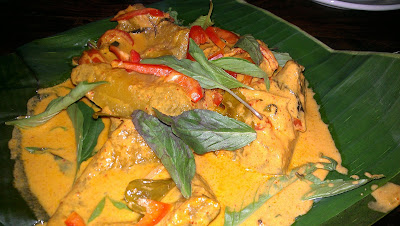 -          7) Noodles with tofu.  This tasted a lot like pad thai, but not as dry as pad thai often is.  A little nutty, a little vinegary.  Not quite as exotic as the other dishes, but still very flavorful.

-         8) Fish.  No idea what kind of fish this was.  Sort of the shape of flounder, but the tail wasn’t shaped like a flounder tail.  At any rate, it was a flaky white fish and I am a flaky white fish kind of girl, so I loved it.  The peppery tangy dipping sauce on the side was good, but holy moley – so spicy!

-        9)  Finally – mango with sticky rice.  The mango was perfectly ripe.  The rice was perfectly sticky.  If you are a fan of this dessert, this is a really good version of it.  I am just starting to get on the coconut/coconut milk bandwagon and still only like it in savory dishes with some spice.  My dining companions happily crushed this one without me though.

In addition to all of this, you are given a large bowl of white rice to sop up all of the amazing sauces.  I think I could pour that pumpkin curry sauce on anything and it would be good.